Is OAN the Leading Edge of Russian Misinformation? 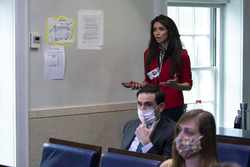 In what appears to be a signal of intensifying political warfare ahead of the November election, One America News Network, the Trump-supporting cable channel that has been promoting anti-Biden conspiracies for several months, says it has obtained several hours of secret recordings of then–Vice President Biden’s conversations with Ukrainian officials. If such recordings exist, they’re likely linked to pro-Russian interests in Ukraine and a Russian intelligence operation, two former U.S. ambassadors to Ukraine and a former ambassador to Russia told me. The OAN employee who claims to have the tapes would not say what was on them, other than suggesting that they will be revelatory.

END_OF_DOCUMENT_TOKEN_TO_BE_REPLACED

Black police officer: I feel torn between my race and my badge