The Verdict Is In: Lockdowns Caused More Harm Than Good

In the early days of the pandemic, there was debate over whether lockdowns were worth the economic costs. Now, with months of data, we know the verdict: Lockdowns did very little to save lives, were not worth their economic costs, and their collateral damage could lead to far more deaths worldwide due to social turmoil and disruptions in medical care and food supplies.

The COVID-19 lockdowns may be one of the biggest medical and economic blunders of all time, and those who supported them may have a hard time reconciling their past views with new data. However, it’s not too late to have an open mind.

Sweden’s success without a lockdown when compared to Spain, Italy, the United Kingdom and Belgium is often met with arguments that Norway, Sweden’s neighbor, experienced far fewer deaths, supposedly due to its lockdown. But Norwegians themselves are not so certain. Prime Minister Erna Solberg conceded that she enforced the lockdown out of fear and panic, and the Norwegian Institute of Public Health now says that the country could have achieved the same effects by “not locking down.”

Japan recently ended its state of emergency after suffering only 851 deaths out of a population of 126 million with neither a strict lockdown nor mass testing, a result that highlights how little experts understand about this virus.

Lockdowns Were a False Choice

We should all recognize that COVID-19 is a serious disease that has killed over 400,000 people globally and more than 110,000 in the United States. Yet we should also recognize that Americans were presented a false choice of lives vs. economy when it was always about lives vs. lives. It’s not that we should have done nothing, but our sledgehammer policy did little to actually help those who were vulnerable to the virus and inflicted unnecessary suffering on those who could least afford it. Nearly 40% of the poorest households have lost a job. “This reversal of economic fortune has caused a level of pain that is hard to capture in words, as lives are upended amid great uncertainty about the future,” Federal Reserve Chairman Jerome Powell said regarding the impact mainly on those who could not work from home.

It’s understandable that so many people were early supporters of lockdowns when fear and panic drowned out data and reason. We should not, however, be so forgiving of experts who led us astray, nor to leaders who were so quick to destroy people’s livelihoods without strong evidence, without due process, and without full consideration for the unintended medical, societal, and economic consequences of their decisions; all this for a virus which the CDC now estimates has a survival rate above 99.9% for people under 65.

As the world awakens to how fear and panic drove unnecessary lockdowns, we will also witness political fallout as leaders are exposed for how they turned medical decisions into political ones. For example, U.K. political leaders and their scientific advisers are now pointing fingers at each other over who was behind the quarantine policy.

In the United States, some politicians have started to deflect blame on advisers for their own catastrophic errors in judgment. Gov. Andrew Cuomo is a case in point. He recently said, “All the early national experts, ‘Here’s my projection, here’s my projection model,’ they were all all wrong.”

With the economy reopening and especially with the large crowds gathering across the United States in the wake of the George Floyd killing, we might expect to see some rise in cases. However, we are not seeing what media outlets like the New York Times warned us about as a means to justify a justify a lockdown: exponential rise in cases and a fast track to 128 million Americans infected. 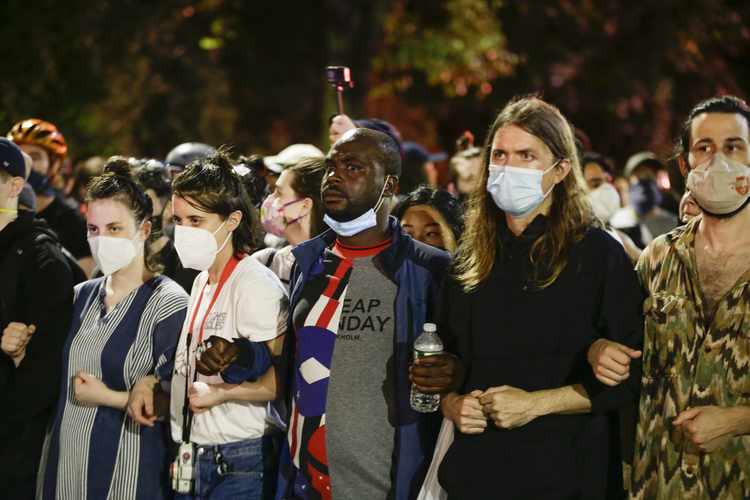 Protesters march during a solidarity rally for George Floyd, Friday, June 5, 2020, in the Brooklyn borough of New York.

So far confirmed cases have fortunately shown a surprising indifference to the large numbers of people gathering in public, even when taking into account the delay of symptoms Even better news is that daily cases have not gone up nationally despite a 25% increase in testing. 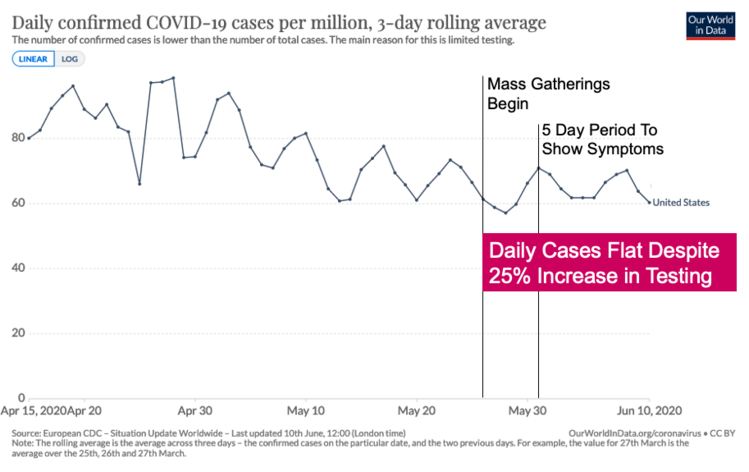 Far more important than cases are hospitalizations, which are a stronger leading indicator of deaths. Minnesota is a logical place to explore early evidence because that is where large public protests began. COVID-19 hospitalizations in Minnesota were on a continuous rise from early March until late May exactly when people began to leave confined homes and gather outside, at which point COVID-19 hospitalizations dropped for the first time in the entire pandemic. While more time is needed to see the full effect, two weeks after the protests began the number of COVID-19 patients hospitalized in Minnesota was down 25%.

It is early and we don’t yet know exactly how this will play out, but the false narrative of lockdowns and the efficacy of their underlying models is disintegrating by the day.

Evidence began to emerge early that lockdowns were not necessary nor effective. If lockdowns were effective, then one would expect flu deaths to drop precipitously after lockdowns started because the flu spreads in similar ways to coronavirus. However, we surprisingly find the opposite  —  flu deaths went up in the weeks after people began spending more time indoors. Flu deaths also never meaningfully dropped below their annual levels despite the lockdown.  While we don’t know why this is, it is consistent with an observable pattern — places that confined more of the broader population indoors also suffered more per capita deaths. This is also true within populations, for example New York “essential workers” who continued going to work every day were significantly less likely to test positive for COVID-19 antibodies than the rest of New Yorkers who stayed at home. NYPD was nearly half as likely to have COVID-19 antibodies than the general population despite a much higher level of personal interaction than those staying at home. 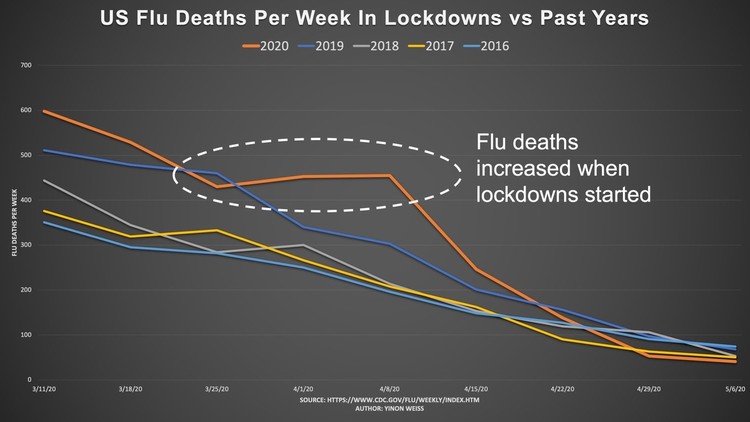 What Successful Reopenings Taught Us

Experts predicted catastrophe in the absence of a lockdown the U.S., a narrative that the media parroted unquestioningly. Here were some typical headlines in reference to Georgia’s reopening:

So now let’s look at the results. Below is a chart taken from Bloomberg News for Texas, Florida, and Georgia, which shows an increase in people resuming normal activities outside of their homes, but without the dire consequences. Further, not shown is also the fact that hospitalizations have dropped significantly since reopening.

Data Shows Lockdowns Had Little Effect on the Viral Spread

One remarkable element of the graph above is that the percentage change in daily cases was going down even before lockdowns went into effect. We can see similar patterns in Europe where the number of deaths stopped growing around the same time no matter how strictly lockdowns were followed, when they started, or if they even started at all. 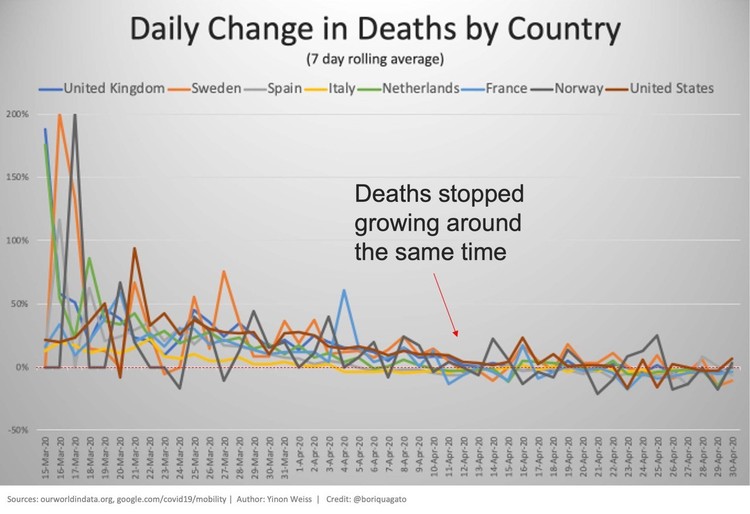 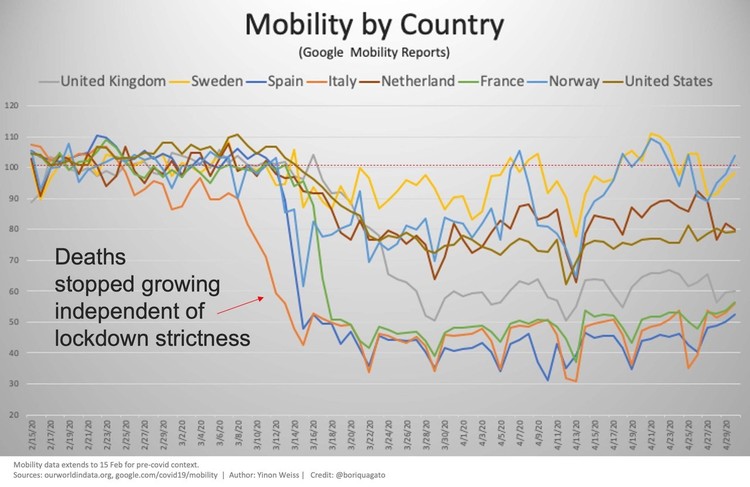 Countries with more outdoor mobility tended to have fewer per capita deaths, though this doesn’t prove cause and effect. For that we can compare the viral reproductive rates (Rt) in relation to when lockdowns started and ended, and what we find is that the viral reproductive rates showed no meaningful change in trajectory before or after lockdowns. Below are a few examples, but they are true for just about every country. 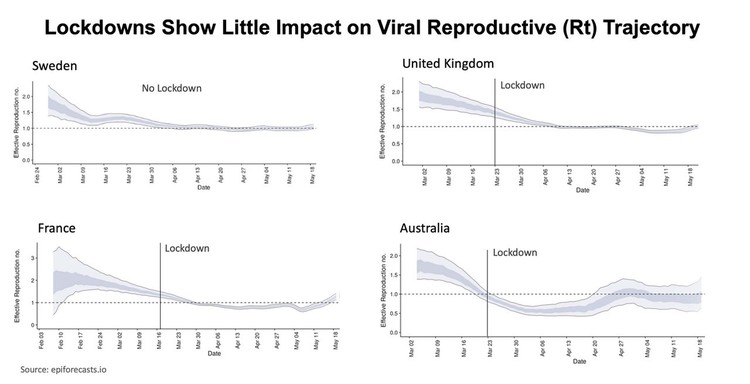 The viral reproductive number (Rt) was already on its way down and had its most significant drop before lockdowns started. Furthermore, we see no meaningful change to the viral trends when lockdowns started nor when they ended.

A German study showed that the viral rate dropped below 1  —  the critical number needed for the virus to decay into extinction  —  a full three days before the national lockdown there even started. 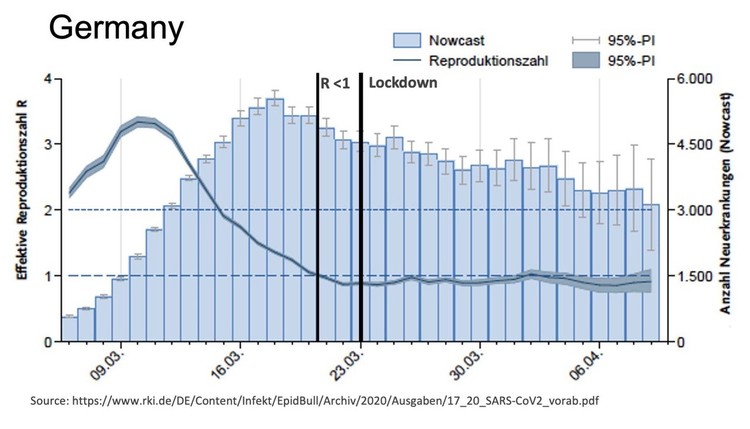 A similar report found that infections peaked in the United Kingdom several days before their lockdown started and that the lockdown did not improve the downward infection trajectory. 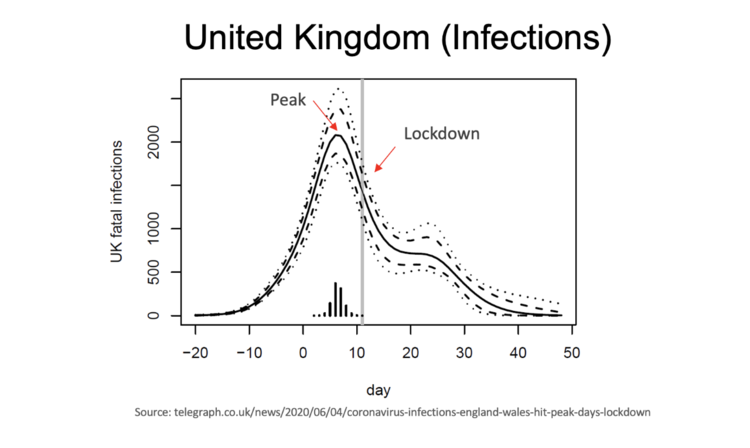 Germany and the U.K. are not exceptions. A JP Morgan report found that lockdowns failed to alter the course of the pandemic for nearly all U.S. states and countries worldwide. Theoretical models will continue to claim that lockdowns were essential, but the emerging mountains of real world data show that even if well intentioned, lockdowns were simply not materially responsible for saving lives.

Why Did Lockdowns Fail?

Why did viral rate drop before lockdowns? Why didn’t lockdowns help? Why didn’t lifting lockdowns hurt? Coronavirus spreads from person to person, so it only makes sense social distancing helps, right?

First, far fewer people may be susceptible to the virus than assumed. Second, common sense social distancing exercised voluntarily before lockdowns, such as avoiding large indoor crowds along with simple hand washing, may have had the biggest impact on lowering the viral growth rate. The social distancing practiced by the Swedes and the Japanese during the pandemic without the threat of government coercion, as well as by many Americans after reopenings, highlights that coercive authoritarian measures, such as small business closures and arresting people for visiting a beach, were never necessary.

Wisconsin is an ideal test case because the state’s government-mandated restrictions were thrown out overnight by the state Supreme Court, creating a valuable experiment. A month later there has been almost no effect on the viral reproductive rate – the critical number needed to control the spread of the virus – and more importantly, COVID-19 hospitalizations have continued to drop despite the abrupt removal of the state lockdown.

To those who say that we couldn’t have known this back in March, that is plainly false. There were credible people warning us that we were “jumping off a cliff,” including John P.A. Ioannidis of Stanford University School of Medicine.  Ignoring the early warnings of skeptics was costly, particularly in the less-developed world.

If the biggest victims of lockdowns are the poor and marginalized, it makes sense that the pain would be amplified in poorer countries. Following the example set by the West, nations such as Kenya, Zimbabwe, Mozambique, and Nigeria locked down even though there was never a “curve” to flatten in the first place, perhaps because the median age in those countries is under 19 years old. 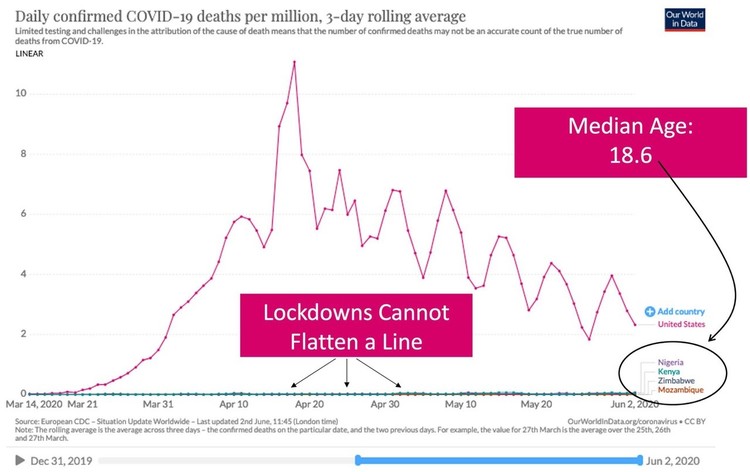 “African economies are staring at an abyss” according to Ethiopia’s prime minister, as sub-Saharan Africa faces its first recession in 25 years. South Africa may suffer 29 times more deaths from the lockdown than from COVID-19. Here’s what we may expect across the world:

Unnecessary Suffering in the United States

Those who continued to collect six-figure salaries while working from home wearing pajama bottoms on Zoom calls were the quickest to support lockdowns, but this cavalier attitude entailed an almost depraved indifference to the disproportional suffering of the impoverished and marginalized who saw their very livelihoods threatened. These are just some of the examples of what the U.S. is seeing:

In addition to unemployment, denial of health care, of education, and increased anxiety, the lockdowns will also cause long-term scarring that may permanently damage our nation:

The hard truth is that these shutdowns were an unnecessary catastrophe. If we want this not to be a total loss, we must learn from it. We must learn to not blindly trust experts, to not corrupt science for politics, and to not give up our most basic freedoms in the face of fear. If society can learn any of these lessons, then one day we will be able to say that this was truly not in vain.

Yinon Weiss is a tech entrepreneur, a U.S. military veteran, and a bioengineer by education.