Media-Wise, Biden Is Far Behind Trump 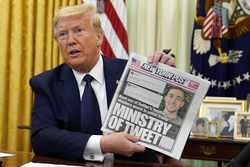 FDR’s fireside chats made him the radio president, JFK showed how powerful television can be, and Donald Trump continues to display an unparalleled mastery of social media, which no doubt will in part define his presidency.

But will it win him reelection?  The continued threat of COVID-19 is reshaping the political atmosphere leading up to this fall, since many Americans are social distancing and using digital media more heavily to share and consume news.

It’s the perfect formula for the spread of misinformation, and it makes for a challenging environment for the Democratic challenger, Joe Biden.

In-person rallies were suspended when the World Health Organization declared COVID-19 a pandemic, and public health officials’ social distancing guidelines have thwarted many of the campaigns’ plans since. As a result, we are seeing history in the making: an almost fully mediated campaign for president.

The shift to remote-style campaigning clearly benefits the Trump team, for now. It is reaping the typical benefits of incumbency, such as a fundraising advantage and unfettered access to the media and the American public. But during the pandemic, Trump’s bully pulpit appears to have grown even stronger, with greater opportunities for him to speak to the American public free of charge. On Friday, for example, Trump held a press conference where he glossed over the anguish Americans across the country are facing while touting a recent decline in unemployment rates, taking credit for saving “millions of American lives,” and blaming state and local leaders for remaining problems with policing and the economy.

Before the return of Black Lives Matter protests in response to the police killing of George Floyd, Biden had little opportunity to reach mass audiences. His attempts at holding virtual campaign events were labeled “a disaster,” and although his team has appeared to work out some of the kinks, it is clear they must do more to energize potential voters between now and Nov. 3.

Biden’s team better improve its social media presence, because Trump has a huge $187 million edge in advertising. Facebook’s Ad Library shows that the Trump campaign and its affiliated PACs ran more than $41 million in ads on all Facebook-owned platforms since May 2018, compared to slightly more than $15 million in such ads for Biden during that time. (It must be pointed out, however, Biden didn’t announce his candidacy until April 2019.)

But the Biden campaign recently hired a number digital whizzes from the Obama team, and have increased digital advertising efforts significantly. As the pandemic emerged, the vast majority of his ads focused on health care. The Trump campaign, by contrast, focused the bulk of its efforts on immigration and “fake news.” However, those ads made up just a fraction of the hundreds of thousands of ads the Trump team has targeted to individual Facebook users.

Biden is also at a clear disadvantage when it comes to his own social media posts. Not only does he lack a strong follower base — Trump has nearly 110 million followers on Twitter and Facebook combined, whereas Biden has a mere 7.7 million — but he also lacks rhetorical savviness and the knack for media spectacle that Trump is known for.

For example, some of Trump’s recent controversial tweets — linking absentee ballots to voter fraud, accusing Barack Obama of committing crimes more scandalous than Watergate, alleging one of his most vocal critics committed murder, and suggesting that police should respond to protestors with violence — are irresistibly salacious. Not only do messages like these spread false information that helps energize his base and generate outrage among his opponents, but they also attract media attention.

As my research has shown, Trump’s posts not only speak directly to a broad audience on social media, but they are amplified significantly thanks to attention given them by media professionals. This power is common to the presidency, but when considered in the context of the pandemic and the election cycle, we should remain mindful of this ability to shape media and public agendas.

Whether or not the sideshows help Trump achieve genuine political goals, their ability to redirect attention — namely, away from his mishandling of the greatest public health crisis of our lifetime — should be seen as a romping success for him, and a failure for much of the public.

By comparison, Biden’s recent Twitter posts have focused on criticizing his opponent, empathizing with average Americans, displaying his leadership qualities, and the like. These messages may be just what voters are looking for from their next president, but in terms of helping him break through the wall-to-wall coverage of Trump, they appear to be falling far short.

To turn the tides in their favor, Biden’s team must continue to find creative ways to draw attention back to their candidate. That could mean showing bold leadership on how to confront the myriad problems America currently faces, discovering new ways to mobilize voters, or inspiring grassroots efforts for supporters to amplify campaign messaging. Either way, a failure to innovate in the current moment may mean a failure in November.