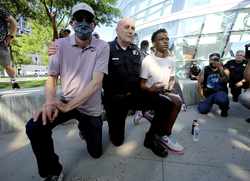 The taking of George Floyd’s life has provoked both peaceful protests and violent rioting in American cities. The turmoil in our streets underscores the essential importance of a criminal justice system rooted in the rule of law and of a free press that reports accurately on the actions of citizens and government officials. The questions roiling the nation about police brutality, civic unrest, and America’s commitment to human rights will linger. They make even more urgent the work of the Commission on Unalienable Rights created last July by Secretary of State Mike Pompeo.

As it enters the last phase of its work and readies its final report, the commission continues to confront the skepticism and indignation that greeted its creation. Among the most common and confounding of the criticisms — put forward bluntly by human rights activists, former public officials, and Capitol Hill lawmakers — is that the commission’s work is superfluous because human rights and America’s commitment to them are well understood, settled, and uncontroversial.

But the commission’s critics confuse their own certainties with near-universal consensus. They would leave the post-World War II human rights project, which has deep roots in the American constitutional system, exposed to attacks from left and right and increasingly unable to explain itself to a nation that seems to grow more polarized by the day.

Among the benefits flowing from the reexamination of America’s distinctive rights tradition is the lesson in pride and humility that it furnishes. The pride has its source in the principles inscribed in the nation’s founding and the progress over the centuries that has been made in living up to them. The humility stems from an appreciation of the nation’s imperfections and of the urgent and unfinished work the United States confronts at home and abroad. That lesson of pride and humility bridges political divides and fortifies the making of foreign policy.

In a Wall Street Journal op-ed last summer announcing the commission, Secretary Pompeo underscored its limited and specific purpose: “The commission’s mission isn’t to discover new principles but to ground our discussion of human rights in America’s founding principles.” In addition, the secretary asked the commission to examine the interplay between America’s founding principles and the obligations the country embraced in the 20th century. Highlighting “the human-rights panel Eleanor Roosevelt convened in 1947,” he wrote, “the Commission on Unalienable Rights will study the document that resulted from that effort, the Universal Declaration of Human Rights, along with our founding documents and other important works.”

Such an undertaking is necessary because for more than a generation professors and pundits have demonstrated a pronounced tendency in their discussions of the United States’ founding and unfolding to focus on one dimension of a complex whole. Some concentrate on the United States’ great achievements. Others dwell on the nation’s grave transgressions. Few seek the bigger picture, which includes both.

Much about America justifies citizens’ pride. In 1776, the U.S. Declaration of Independence marked the first time in human history that a nation came into being by solemnizing its commitment to “unalienable rights” — those rights inherent in all persons — in a public document drafted also with the express purpose of demonstrating “a decent respect to the opinions of mankind.” The U.S. Constitution, which secures those rights through powers grounded in the consent of the people, represents an epic achievement in the history of human freedom. Notwithstanding the present turmoil, the United States’ nearly 250-year-old experiment in liberty under law has resulted in a nation whose citizens enjoy a freedom, pluralism, and prosperity that few countries have equaled and which remains the destination of choice for great numbers of immigrants around the world seeking to better their lives.

At the same time, reflection on the American experience encourages humility. Our struggle for unalienable rights is soaked with blood: of slaves, who were shipped to America in chains, and whose descendants toiled for more than two centuries as their owners’ property; of African Americans who, following the Civil War, were granted the formal rights of citizenship but were deprived of the realities of freedom and equality by the brutalities of Jim Crow; of Native Americans driven forcibly from their ancestral lands and subjected to racism and discriminatory laws; of immigrants who also suffered discrimination and were compelled to undertake backbreaking outdoor labor and suffocating work inside factories and sweatshops to eke out a meager wage to support their families; and — despite the conscientiousness and professionalism of most the nation’s police officers — of the victims of lawless violence that persist within the criminal justice system.

A similar lesson in pride and humility derives from consideration of the Universal Declaration of Human Rights. The UDHR’s aim was to establish, as its preamble states, “a common standard of achievement for all peoples and all nations, to the end that every individual and every organ of society, keeping this Declaration constantly in mind, shall strive by teaching and education to promote respect for these rights and freedoms and by progressive measures, national and international, to secure their universal and effective recognition and observance, both among the peoples of Member States themselves and among the peoples of territories under their jurisdiction.”

A non-binding but authoritative document that enables nations to measure themselves as much as judge others, the UDHR followed in the footsteps of America’s Declaration of Independence. As Abraham Lincoln emphasized, while the Declaration did not emancipate the slaves, it made a decisive contribution to the universal cause of freedom inasmuch as it “set up a standard maxim for free society, which should be familiar to all, and revered by all; constantly looked to, constantly labored for, and even though never perfectly attained, constantly approximated, and thereby constantly spreading and deepening its influence, and augmenting the happiness and value of life to all people of all colors everywhere.”

The United States should take pride in the leading role it took in drafting the UDHR and in winning approval of it in 1948 in the U.N. General Assembly. Following the carnage of two world wars, the United States did what no victorious great power had ever done: it declined claims to territory or reparations and instead demonstrated a commitment to individual freedom and human dignity by incorporating the advancement of human rights into its own foreign policy and by working with other countries to recognize the securing of human rights as a shared concern of all nations. The international human rights movement that the UDHR energized helped discredit Soviet communism and emancipate the nations of eastern and central Europe. It contributed to the dismantling of apartheid in South Africa. And today, while addressing violations around the world, it rightly focuses on the most systematic abuses of human rights. These prominently include the Communist Party of China’s reeducation camps, in which the CCP has imprisoned a million Uighurs; the CCP’s attacks on Christians; the CCP’s ruthless monitoring and censoring of the Chinese people’s speech; and the CCP’s infringement of the rights of the people of Hong Kong.

Yet defenders of human rights in the United States and elsewhere have good reason to be humble. The immediate moment at home is sobering: The United States faces the daunting challenge of addressing, in a manner consistent with citizens’ rights and constitutional imperatives, social and political turmoil not seen for decades.

The international context presents challenges of a different order of magnitude. Some 70 years after the U.N. General Assembly passed the UDHR, approximately half the world’s population lives under authoritarian governments that routinely trample on fundamental freedoms. Moreover, some of the international organizations that were created to promote human rights have been captured by autocratic powers that pervert those institutions to serve illiberal and anti-democratic ends. The world’s most populous nation, the People’s Republic of China, not only rejects the idea that governments must be constrained by respect for the dignity of the individual but seems bent on refashioning an international order hostile to the principles of freedom.

Meanwhile, the human rights movement in the United States is mired in controversy. Influential voices on the left disparage the cause of human rights as a vehicle for imposing Western hegemony. Powerful critics on the right regard the institutionalized apparatus of the human rights movement as a thinly disguised system designed to entrench progressive transnational government. Now, scandalized by the killing of George Floyd, many Americans are tempted to blur the difference between autocracies that systematically deny fundamental rights and liberal democracies whose governments and citizens respond with indignation and anger when public servants abuse their power by denying fellow citizens’ basic rights.

It is in light of the United States’ genuine accomplishments and its real failings, and with a view to the perplexities that beset the cause of human rights, that Secretary Pompeo established the Commission on Unalienable Rights. Not the least of the commission’s contributions would be to renew the nation’s understanding of that complex combination of pride and humility that is among the most elusive and essential prerequisites for a foreign policy — and a domestic policy — grounded in America’s founding principles.

Peter Berkowitz is director of the State Department’s Policy Planning Staff and executive secretary of the department’s Commission on Unalienable Rights. He is on leave from the Hoover Institution, Stanford University, where he is the Tad and Dianne Taube Senior Fellow.