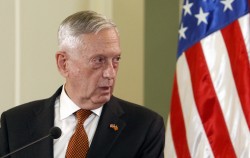 James Mattis, the esteemed Marine general who resigned as secretary of defense in December 2018 to protest Donald Trump’s Syria policy, has, ever since, kept studiously silent about Trump’s performance as president. But he has now broken his silence, writing an extraordinary broadside in which he denounces the president for dividing the nation, and accuses him of ordering the U.S. military to violate the constitutional rights of American citizens.