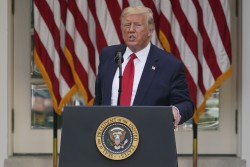 Then the leader of the free world, over a period of days, tweeted out a series of attacks on Joe Scarborough, intimating the cable news host and former congressmen murdered a female aide who, in actual fact, died of natural causes. The dead woman’s husband wrote a heart-wrenching public letter to Twitter’s CEO, Jack Dorsey, begging the company to take down the tweets desecrating the memory of his wife.

The question of what to do about Trump was no doubt a thorny one for a company that once proclaimed itself the “free-speech wing of the free-speech party.” But however desperately one believes Trump’s tweets necessitated a response, it would be hard to imagine Twitter handling this situation worse than what it did this week.

Aside from issuing a public apology, Twitter didn’t do anything about the tweets that prompted the outrage. Instead, the social media company started to “fact-check” Trump’s tweets – and in doing so, Twitter provided a master class on how not to do a fact check.

On Tuesday, Trump fired off two tweets about the increase in mail-in voting expected across the country as a result of the pandemic. Suffice it to say, he’s not a fan: “There is NO WAY (ZERO!) that Mail-In Ballots will be anything less than substantially fraudulent. Mail boxes will be robbed, ballots will be forged & even illegally printed out & fraudulently signed. The Governor of California is sending Ballots to millions of people, anyone … living in the state, no matter who they are or how they got there, will get one. That will be followed up with professionals telling all of these people, many of whom have never even thought of voting before, how, and for whom, to vote. This will be a Rigged Election. No way!”

Twitter soon appended both tweets with an exclamation point followed by a link where users of the site could “Get the facts about mail-in ballots.” Click on that link and you see a short statement from Twitter that “Trump makes unsubstantiated claim that mail-in ballots will lead to voter fraud.”

So here’s mistake No. 1: Twitter is fact-checking opinion, not facts. Strip away the Trumpian hyperbole and Trump is clearly expressing concern about the upcoming election. As a result of the pandemic, we simply don’t know what’s going to happen in an election where potentially tens of millions of additional Americans are voting by mail for the first time, and whether it “substantially” threatens the integrity of the process. Either way, this is clearly Trump’s opinion about an election that hasn’t happened – and try as you might, you can’t fact- check the future. (That said, there is one contestable fact in Trump’s tweets above, which is the claim that California Gov. Gavin Newsom is sending out mail-in ballots indiscriminately. That’s not true, and strangely, Twitter’s fact check doesn’t specifically refute it.)

The second mistake is that Twitter got its own facts wrong. Twitter’s statement responding to the president declared, “Fact-checkers say there is no evidence that mail-in ballots are linked to voter fraud.” That is untrue. To the extent that voter fraud exists, fraud associated with mail-in ballots “is vastly more prevalent than the in-person voting fraud that has attracted far more attention,” according to The New York Times. A study done by Cal Tech and MIT also confirms the increase in fraud associated with mail-in voting is enough of a problem that the study’s authors recommended states “restrict or abolish on-demand absentee voting in favor of in-person early voting.”

There’s also the accompanying issue of “ballot harvesting,” in which a third party transports mail-in ballots to be counted. This is legal in some places such as California, and illegal in other places such as North Carolina, where a congressional election was recently overturned after a GOP operative was caught harvesting. In 2017, a former U.S. Postal Service employee in Texas was convicted of bribery for selling a list of absentee voters to vote harvesters for $1,200. Trump’s worry that “professionals” will manipulate mail-in ballots to fraudulent ends in November may be conjecture, but it’s grounded in enough facts that calling it “unsubstantiated” is dubious.

Twitter’s third mistake is that fact-checking only works insofar as you trust the institution doing it, and Twitter has no credibility, journalistic or otherwise, to wager here. It was quickly noted that Twitter’s executive in charge of “site integrity,” who is largely responsible for devising and implementing its new fact-checking policies, is a man with thin journalistic credentials named Yoel Roth. Roth has his used his own Twitter account to express his vitriolic and anti-Trump political opinions. Here’s one example: “I’m just saying, we fly over those states that voted for a racist tangerine for a reason.” Here’s another: “ACTUAL NAZIS IN THE WHITE HOUSE.” The latter accusation merits its own fact-check, but either way, bias against conservative users of Twitter is a long-running concern. No one has any reason to expect Twitter executives are capable of being judicious and fair when weighing in on political debates.

Which brings us to Twitter’s fourth major mistake. Its new fact-checking policy is unclear and there’s no reason to believe it’s going to be applied consistently. So far only Trump has been fact-checked by the platform, and badly at that. But since Twitter’s inception, foreign governments have routinely used it for indisputably dishonest propaganda reasons. The most recent example being China, a country with actual concentration camps, unleashing a huge disinformation campaign on Twitter to deflect blame for unleashing the coronavirus on the world. This has been ongoing for months now and Twitter has done little to stop it.

While it would be nice to believe that Twitter was making rookie fact-checking mistakes, that doesn’t account for the fact that the same fallacious rhetorical tactics are endemic to PolitiFact and other media fact-checkers, who have been employing political double standards for years. Other social media companies, notably Facebook, even rely on media fact-checkers’ subjective and frequently tendentious judgments to censor political speech.

Twitter’s failed foray into fact-checking also blew an opportunity to hold Trump accountable for his vicious rhetoric. Surveying the opinions, the good news of the last week was that nearly all conservative media outlets are on record decrying Trump’s odious tweets. But any hope of bipartisan condemnation became that much harder following Twitter’s ham-fisted reminder that so many of our media companies seem incapable of brokering an honest discussion, even when Trump presents the opportunity on silver platter.

The worst may be yet to come. Observers had been saying for years that social media companies’ haphazard policing of speech was destined to provoke a political backlash. Now Trump is issuing an executive order that threatens legal sanctions on social media companies. It would be nice if a country that has long claimed freedom of speech as its first and most sacred right actually had a “free-speech wing of the free-speech party.” This week provided a worrying reminder that such a thing doesn’t exist in Silicon Valley or Washington.