Honoring the Man Who First Honored Our Fallen Soldiers 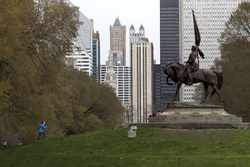 On a day when America mourns her war dead — and honors the military service of those who answered their country’s call — we are coping with the casualties in another kind of conflict, this one with an unseen enemy that breaches national boundaries as effortlessly as rainfall. This new crisis has taught us that the heroes among us include not only military personnel and first responders, but health care professionals and everyday workers who risk infection and death to prepare food, stock shelves, deliver our packages, and perform a hundred other essential tasks to keep their fellow Americans housed, fed, and safe. God bless them all.

Today is an apt moment to recall an American war hero who popularized the custom of decorating the graves of the fallen with flowers and designating a day each year to honor them. Although many Americans had a hand in creating Memorial Day, none was more important than a former soldier and statesman named John A. Logan. Almost unknown today — even in Washington, D.C., where many residents regularly travel around, or traverse, Logan Circle — citizen-soldier John Logan was one of the most famous men in America in the years after the Civil War. He is also a study in the power of redemption. His redeemer, at least in the secular sense, was Abraham Lincoln.

Logan was born and raised in the southern tip Illinois, near the borders with Kentucky and Missouri. The area, Southern by culture, was a pro-slavery hotbed, and Logan and his family had deep connections to those Border States. Logan’s father was a prosperous physician and slave-owning farmer in Missouri who became active in Democratic Party politics once he relocated to Southern Illinois, winning a seat in the state legislature. His son, who went by “Jack,” attended law school in Kentucky where he honed his speaking ability and nurtured his father’s racist views.

In 1853, Jack Logan followed in his father’s footsteps, running as a Democrat and winning a seat in the state legislature on the basis of a campaign in which he co-sponsored Illinois’ notorious “Black Codes,” which not only prohibited interracial marriage but essentially barred free blacks from moving to the state. In Springfield, and in Washington after he won a House seat, Jack Logan was a supporter of Illinois’ famous slavery appeaser Stephen A. Douglas, and although his father had known Abraham Lincoln when both served in Springfield, Jack Logan was a fiery speaker who denounced “Black Republicans,” a derisive description that needs no amplification.

Before entering politics, Logan had enlisted in the U.S. Army after the outbreak of the Mexican-American War. He’d been sent to the front, but didn’t see action after an outbreak of measles laid his regiment low; Logan himself had nearly died. And although neither his racist views nor hyper-partisanship were no secret, when Fort Sumpter was fired upon by Confederates after Abraham Lincoln’s election, Jack Logan’s heart felt the tug of patriotism, as did most of those in Illinois. As a new member of Congress, he rode out to see the first big battle of the Civil War at Manassas. And though he had promised his wife that he was only going to observe, once he saw the battle unfolding at Bull Run, he immediately joined the 2nd Michigan Infantry.

Returning to his home district weeks later, Logan delivered a fiery speech in support of the United States at the town square in Marion, an oration credited with helping to keep the region in the Union fold. That August, Logan began signing up volunteers for the 31st Illinois Infantry, which President Lincoln asked Logan to lead. Both the regiment and its commanding officer would distinguish themselves in battle, earning memorable nicknames along the way. Logan was known as “Black Jack” by his men; the unit itself was dubbed the “Dirty First,” for its willingness to fight at the front.

By war’s end, Logan was thrice-wounded Union general, a bona fide war hero. Statues honoring him stand not just in Washington but also at the national monument in Vicksburg and in Chicago’s Grant Park. Resuming his political career after the war, John A. Logan’s transformation had become complete. He became Republican, serving as a U.S. senator and a GOP vice presidential nominee in 1884. He is one of only three men mentioned in Illinois’ official state song — Lincoln and Ulysses Grant being the others. “John A. Logan,” Civil War historian Gary Ecelbarger once observed, “may be the most noteworthy 19th century American to escape notice in the 21st century.”

That historic injustice cannot be rectified in a single essay, but let me point out that before leaving military service, Gen. Logan made one last great contribution to his country. On April 16, 1866, a group of Union veterans had gathered on the steps of Crab Orchard Christian Church outside the Illinois town of Carbondale when they spotted a war widow and her children placing flowers on the grave of their fallen husband and father.

Deeply moved, the men watched respectfully until the family left, and then began gathering wildflowers and decorating the headstones of other veterans buried in the graveyard. That simple gesture begat an official civic ceremony for the war dead held at Carbondale’s Woodlawn Cemetery two weeks later. Some 200 Union veterans were in attendance, including Logan, who was asked to be the keynote speaker.

As the General John A. Logan Museum in Murphysboro, Ill., makes clear, the idea for Memorial Day was not conceived by Logan. But he did issue General Order No. 11, establishing May 30 as the annual day “for the purpose of strewing flowers, or otherwise decorating the graves of comrades who died in the defense of their country.” Logan would later term this order “the proudest act” of his life, which was saying something.

In 1884, he ran with James G. Blaine on a Republican ticket that lost narrowly to Democrats led by Grover Cleveland. But Logan would not have survived a single term in that office. He died two years later, on the day after Christmas, from complications from his war wounds.

That was not the end of his family’s suffering. Thirteen years later, his widow received a telegram from President McKinley. Her son, John A. Logan Jr., had been killed during a now-forgotten U.S. war in the Philippines.

The president sent a second telegram to Ohio, for the wife of the slain soldier. “It is my painful duty to convey to you the sad intelligence of the death of your husband while gallantly leading his battalion,” wrote the president.

Because of the viral pandemic, Arlington Cemetery is not open to the public today. But if you see flowers anywhere, or a flying flag, and are having kind thoughts about those who gave this country everything that was ever asked of them, and more, remember John Logan and his namesake. And contemplate the wondrous idea that we have the power to grow in ways that allow us to meet the moment when our fellow human beings need us most.