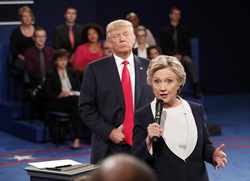 Shortly after the 2016 election, an editor from my alumni magazine emailed to say she was putting together a collection of essays exploring Donald Trump’s presidency and asked if I’d be willing to contribute an article on “lessons learned” from the election. My piece, titled “Beware the Confident Experts,” appeared in the March 2017 issue of the Princeton Alumni Weekly and laid out the case for the why the polls weren’t nearly as wrong in 2016 as the pundits were.

I went back through the data to show the race was objectively close, but that’s not how it was presented to the American people by the supposed experts. I wrote:

Heading into Election Day, most Americans were convinced Hillary Clinton would win, and they would not have characterized the race as “close” or “competitive.” And no wonder. Everywhere they looked in the weeks leading up to Election Day there was some “expert” on television, on the internet, on the radio, or in the newspaper declaring with complete confidence that Trump had little or no chance to win the election.

I concluded the essay on an upbeat, though admittedly naïve, note: “Here’s hoping we’ve learned our lesson.”

Fast-forward to MSNBC earlier this week, where an ominous sign appeared that the answer is a definite “no.” Discussing Trump’s reelection chances with anchorman Brian Williams, prominent Democratic strategist James Carville was caustically dismissive. “They were going to lose before this [coronavirus] hit. They’re just going to lose worse now,” Carville said. “… It don’t matter if the Dow is 35,000, he’s not going to win. He wasn’t going to win when unemployment was 3.5%; he’s certainly not going to win now.”

That sounds a lot like the misplaced certitude we heard in 2016. Don’t fall for it again. Trump may lose in November, or he may win, and James Carville doesn’t know any better than you or I what the outcome will be 5 ½ months  from now.

The 2016 election was a hard-fought campaign with plenty of twists and turns. But it was also, in a historical sense, a conventional election. And the pundits blew it. The 2020 race is utterly unprecedented: a presidential contest that may or may not include traditional rallies, conventions, and face-to-face debates. It might also be a year in which voters don’t even go the polls, something that has never happened in our nation’s history.

Heaped on top of those logistical issues, the public is grappling with a once-in-a-century public health crisis, economic destruction and unemployment not seen since the 1930s, and increasingly contentious debates over basic civil liberties, executive power, and individual freedom. How can the pundits possibly know how this combustible combination of factors will affect the outcome of the race?

Public opinion polls offer a snapshot in time that can only tell us so much. Fundraising numbers can be an indicator of grass-roots enthusiasm. Shoe-leather reporting from the trail, with stories about the views of rank-and-file voters, can offer more context.

We can look to all of these clues over the course of the coming weeks and months to help us make educated guesses about what might happen on Nov. 3. But ultimately that’s all they are: reading the tea leaves.

So I’ll repeat my warning for the 2020 election: Beware the overconfident experts. The more smugness they display while offering a prediction, the more skepticism you should feel. Pay closer attention to those  willing to concede their uncertainty. Think critically and do not be afraid of bucking the conventional wisdom when appropriate. At the very least, you’ll have a greater likelihood of not being surprised or disappointed in November.