'Obamagate' Is Niche Programming for Republican Base 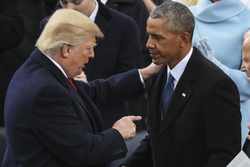 Donald Trump will not shut up about Barack Obama-not now, not ever. On Thursday morning, amid the gravest economic crisis in a century and a deadly pandemic that will have killed more than a hundred thousand Americans by the end of this month, Trump yet again accused his predecessor of culpability in "the biggest political crime and scandal in the history of the USA." Obama, he said, should be hauled before the Senate to testify. "He knew EVERYTHING," Trump added in his tweet, one of dozens of attacks in the past few days in which he has targeted "Obamagate."

US coronavirus: Health officials double down on dangers of mass gatherings